Jeff Reno loves to race.  Jeff Reno also loves a challenge.  When the F2 Dave Packer Challenge was announced, Reno (#34, Okeechobee, FL) saw an opportunity to combine his passion for winning while adding to his growing collection of championships. 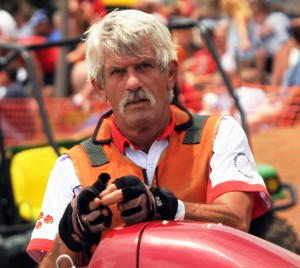 The Challenge was a 2013 joint effort between the OPC category’s two national series –Powerboat Superleague and US F1 Powerboat Tour– for the SST 120/SST 200 classes and was put in place to encourage participation of F2 teams to attend more OPC events. Each circuit promoted the concept with matching money ($500 per series) as well as offering a year of free entries for all series races in 2014.  The Dave Packer Trust became the project’s sponsor with a matching grant of $1000.  Nine F2 series races across the east, north and south and southwest became the core of the Challenge and to be eligible, a driver had to compete in seven events.

By the end of the season, Reno had raced in a majority of the scheduled US F1 Powerboat Tour and Powerboat Superleague events (combined) including the National Championship race; he then added the ¼ mile Record Run – not part of the Challenge – “just for fun.”  His series travels included stops in six states – none of them in Florida (his home) – visiting Texas and West Virginia twice during the 2013 season.  This commitment plus a series of podium finishes – five of seven events, against twenty-one competitors throughout the year, earned Jeff the inaugural title.

Jimbo McConnell once described Dave Packer (#48, “The Hawaiian,” Rome, NY) as “one of the few racers who raced with his head.  You always knew it was going to be a nice, clean race with Packer.  He was just such a gentleman both on and off the water.”  The same statement can be made about Reno.  Like Packer, who was instrumental in promoting as well as introducing tunnel boat racing in far-flung areas (Hawaii and Australia) as well as his hometown of Rome, New York, Jeff has promoted races in Okeechobee (FL), his hometown as well as being an ambassador for the sport.

Reno’s dedication to the race, his understanding of the need to support racing events and his willingness to travel in order to compete against as many drivers and teams as possible clearly demonstrates why Jeff is the 2013 F2 Dave Packer Challenge winner.