In a joint release, Rising Sun, Indiana race organizers and Powerboat Superleague announce that they have reached an agreement to make the Rising Sun Regatta the newest event on the 2013 Superleague racing schedule.  A unanimous vote of support from the Rising Sun City Council and the Ohio County Convention Tourism and Visitors Commission allowed the group to make the decision to host the races.  Planned for the weekend of August 17-18, dates originally set for the annual A Roar of Thunder in Aurora, the races will now be held in Rising Sun, just 8.7 miles down the road (Route 56).  Formula Two/SST 120 and the Formula Three/SST 60 classes will form the core of the race program with additional on-water and land-based activities providing a full weekend of entertainment.

“It’s exciting; another new event for the 2013 season and the continuation of the tradition of powerboat racing in southeast Indiana.  We appreciate the confidence that the organizers, the City of Rising Sun, Ohio County and all of the sponsors have placed in Superleague series.  We know from years of experience in producing local festivals as well as operating a national/international racing series, the level of commitment everyone locally has made to us,” stated Sherron Winer (Powerboat Superleague partner).

“We will entertain all of southeast Indiana, the tri-state region, Ohio County, Rising sun and the surrounding areas including all of the fans from the past regattas by giving everyone a free and fun weekend of motorsports excitement.  The races will have a positive economic impact as well as create immediate benefits for area businesses,” said Marsha Louden of the Tourism office.  “We are also hoping to give local groups an opportunity to participate as food booth vendors and to supply other event activities and services as well as further fundraising activities.”

Rising Sun holds an honored place in powerboat racing history.  Remembered as a top venue for past Inboard Category hydroplane events, the loyal and active support of the local residents made the races entertaining, exciting and fun.  A focus on Rising Sun’s riverfront park and the addition of the new multi-lane boat ramp gives the community the opportunity to create an event, which builds on these assets.

For Superleague teams, the continuation of the traditional August race weekend in Indiana allows everyone to collect points (APBA and Superleague), share in the weekend purse, and expand the existing fan base that has been developed over the past fourteen years.

Circuit information including the 2013 schedule, the Race Gazettes with race information with hotels and directions, breaking news, the latest BUZZ, as well as driver/team bios can be found on the Superleague web site (www.aprsuperleague.com).  “Like” us on our Facebook page where you will find current news, updates, race photos, antique archives (old racing photos) and Soundbite conversations– www.facebook.com/PowerboatSuperleague and quick takes on racing will be on Twitter (www.twitter.com/APRsuperleague). 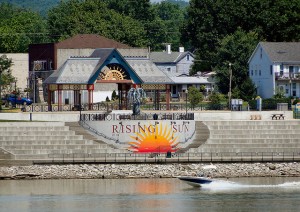